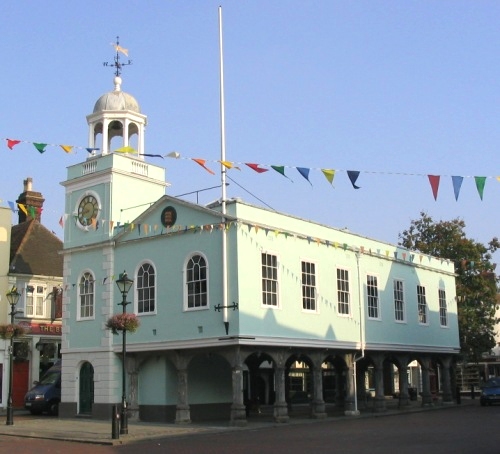 Council meetings are held every four weeks on a Monday in the Guildhall; the public are welcome to attend. For full details see Faversham Town Council website.

Faversham Town Council was formed in 1974 following a re-organisation of local government in which the town lost its borough status - alongside many other towns across England.

Faversham's mayoralty dates from the mid-1250s, soon after Henry III's 1252 charter to Faversham. Robert Dod was the first person to be called mayor, to the annoyance of the Abbot of Faversham, who protested to the king as part of the long battle between townspeople and Faversham Abbey about who held authority over the town. After the abbey was dissolved in 1538 the opportunity was taken to codify the right of the town to govern itself though its own local authority; in 1546 a charter was granted by Henry VIII to the ‘mayor, jurats and commonalty [freemen]’ of the town of Faversham. It was re-granted by James II in 1685.

Faversham Borough Council had been established under the Municipal Corporations Act 1835.

Faversham falls within the Swale administrative district and contains four electoral wards: Abbey, Priory, St Ann's and Watling. Abbey ward has four town councillors, as have St Ann's and Watling; Priory has two councillors. These wards also have seven of the 47 seats on Swale Borough Council.  At the May 2015 election, Faversham residents voted for 12 Conservative councillors and two Independent councillors. After a by-election a Liberal Democrat candidate was elected in place of a Conservative.  Six of the 14 members are also Swale councillors and one, Anthony Hook, is the town's Kent County Councillor. Their details can be found under Links to the left of this page.

Faversham is a member of the Confederation of the Cinque Ports, being a limb of Dover, the town's head port.  The Mayor of Faversham and the Town Clerk attend confederation meetings on behalf of the town council. Further details of Faversham's Cinque Port links can be found here.

The Mayor of Faversham is chairman of the town council and successor in a line of civic heads dating back to the mid 1250s. The mayor is elected at the town council's mayor-making ceremony in May each year. The ceremony takes place in the Alexander Centre. Faversham residents, mayors and mayoresses from across the county and other dignitaries attend this key event in the council's calendar.

Meetings are open to the press and the public. Registered electors of the town may put questions to the town council before formal business begins. The council has a number of committees and working parties, through which work is progressed to the point of town council consideration and decision-making. The council supports the freedom of information to its electorate and minutes of council meetings, planning schedules and budgets are available on-line. All details can be seen on the Faversham Town Council website.

A full list of councillors can be seen here

Abbey Ward
The ward is the eastern part of the town, north of the London-Canterbury railway (excluding Tin Bridge). It includes the Love Lane estate, Millfield estate, Recreation Ground, Dorset Place, much of the town centre, Abbey Street and Belvedere Road.

St Ann's Ward
This encompasses Briton Road, Roman Road and the Cottage Hospital in the east, and stretches past the Western Link Road. The railway is the southern boundary for part of the ward, whose northern boundary runs just south of Bysing Wood Road and Dark Hill.  The ward includes the NatWest Bank side of Market Street and upper West Street, plus lower West Street, the St Ann's estate, Alexander Drive, The Knole, Hazebrouck Road, Wildish Road and roads off it.  It includes Ospringe Road and the eastern end of Lower Road as far as Lion Field.

Watling Ward
This ward is located around the A2, the Roman Watling Street. It includes all of Faversham south of the London-Canterbury railway line.  In addition, north of the line it covers the Tin Bridge area and the west end of Lower Road from its junction with Lion Field to its end at Sumpter Way, as well as the roads reached from turnings off that stretch of Lower Road (such as Lion Field, St Nicholas Road and Cress Way).

Priory Ward
This ward is the north-west area and is bounded by Faversham Creek and Stonebridge Pond, Dark Hill and Bysing Wood Road (both sides of the road) and Oare Creek. As well as The Brents and Wells Way it takes in Ham Marshes and Hollow Shore.

Priory is half the size of the other wards and, therefore, has two councillors. They are: Claire Belsom and Alison Reynolds (BEM).