Sir William Courtenay was born c1800 and best known for his part in the battle of Bossenden Wood.

Come 1838, and Dunkirk was the scene of the last armed rising on British soil. It was just the right place. Though close to Faversham and Canterbury, it was still a wild area. Its people were poor.

So were many people in nearby parishes. The start of farm mechanisation had lost them their jobs, and they and their families were close to starvation. Parish ˜out-relief', which allowed them to stay in their own homes while drawing benefit, had ceased, and many were in and out of the Workhouse. 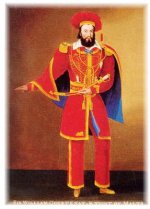 Into this scene of rural deprivation came a colourful character who called himself Sir William Courtenay. Just 38, he was tall, dark and handsome, with immense charm, and the gift of the gab. In earlier life he had attended meetings of the Spencean Society, a proto-socialist organisation, and he identified strongly with society's underdogs. He stood for Parliament in East Kent, but not surprisingly failed to get elected - only the rich had votes in those days. Figuring that constitutional means would never solve the country's ills, or rid it of its conservative Establishment, he decided that rebellion was the only answer.

In Dunkirk and other parishes around Faversham he raised a ragged army of jobless farm labourers. œI'm now going to strike the bloody blow! The streets that have heretofore flowed with water shall flow with blood for the rights of the poor.

Rather late in the day, the authorities realised that he was a serious threat. The Army was called out, and there was a pitched battle in Bossenden Wood. Courtenay's ill-equipped followers were no match for disciplined troops, and were soon defeated. He and seven of his men were killed. On the Government side just two men died. You can see a memorial to one of them, Lieut. Bennett, in the north aisle of Canterbury Cathedral.

Courtenay had claimed he was immortal, so his body was put on show in the stables of the Red Lion, so that people could see he was dead. They flocked to the site. The rebellion hit the national headlines, and an astute publisher brought out an ˜instant', detailed account of it.

The Government realised there was a serious problem in Dunkirk. They dealt leniently with the survivors of Courtenay's army. Most were given parole. Only two were sentenced to transportation, and one of them went on to make a fortune in the Australian gold-fields. Was he the inspiration for Magwitch in Dickens' Great Expectations (1860/1)?