Thomas Arden, or more properly Thomas Arderne, was a past mayor of Faversham who was murdered in 1551 by his wife and her lover, a crime that inspired the first English domestic drama, Arden of Faversham.

The Crime - hitting the headlines

Had there been daily papers in 1551, the murder of Thomas Arden in his own home on 15 February would have hit the headlines.

Crimes of passion were common enough, but this one was special because the victim and his wife were both close to the centre of the national stage.

Arden, born in Norwich in 1508, was a whizz-kid parvenu, who had made his pile as a wheeler-dealer specialising in property confiscated from the monasteries by Henry VIII.

He had moved in high circles in London, then settled in the prosperous port of Faversham, where he acquired an influential new patron, Sir Thomas Cheyne, Lord Warden of the Cinque Ports. He had made a good marriage to Alice Brigandine, daughter of the shipwright who had built the Mary Rose in 1509. Her step-father was Sir Edward North (later Lord North), a Privy Councillor and Chancellor of the Court of Augmentations, which master-minded the sale of monastic property nationwide.

Business-obsessed Thomas made a poor husband and Alice sought affection elsewhere. Thomas Mosby may not have had her husband's background, but he had time, and passion. For the couple the only hope of permanent happiness lay in the death of Arden. This they plotted ruthlessly with the help of hired assassins.

Several attempts on his life were bungled in London and elsewhere before finally a pair of war veterans, Black Will and Loosebag (Shakebag in the play), killed him in his own home while he was playing a game of tables (backgammon) with Mosby.

The guilt of the real culprits was soon established, but because their crime was seen as a possible threat to national security a special court was convened. Their final fate was decided by the Privy Council, of which both Alice's own stepfather and Sir Thomas Cheyne were members. This was no time for sentiment, and it was decided to make examples of both Mosby and Alice. He was hanged in London, she burnt at the stake in Canterbury.

The House - scene of the crime 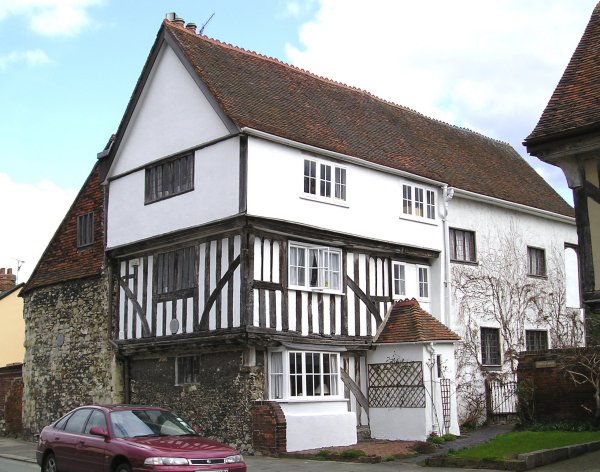 Perhaps nowhere else in the United Kingdom can a Shakespearean-era play be played against the backcloth of the building in which the main events portrayed in it actually took place.

Arden's House, as it still known, was still fairly new when Thomas and Alice moved there in 1544. It had been built in about 1475, probably as a guest-house, for the great Benedictine Abbey founded by King Stephen in 1147. It stood then, and until 1772, against the outer gateway which stood astride Abbey Street. With a handsome beamed parlour and hall above, it was the epitome of late 15th-century domestic comfort, the kind of place in which Cardinal Wolsey would have felt at home during his visits to the Abbey in 1520, 1527 and 1528.

It has been little altered since. The stub of the outer gateway, dating probably from the 13th century, forms part of the house and features a small oratory. A south wing of the building has been demolished, leaving just a handsome remnant in Arden's Cottage. By the 18th century it had become a farmhouse, and remained so till the early 20th century. By the 1950s, in common with other properties in once-prestigious Abbey Street, it had fallen on hard times and was threatened with demolition. Even at £950 it would not sell till a public-spirited purchaser came forward to restore it. Structurally there was little wrong with it but thorough restoration was still needed.

Since then it has been lovingly cherished by successive owners.

Arden's House is still used as a private residence but the Faversham Society's Open House scheme in July each year is an opportunity to see over this historic building.

A remarkable play by any standards, Arden of Faversham marks a milestone in English drama. Effectively it is the first piece to be based not on mythology or national history but on recent real-life events. Not just Alice and Mosby but several others can be traced in the records. It can also be seen as the first comedy-thriller, with the droll antics of Black Will and Shakebag counterpointing the passion and plotting of Alice and Mosby. And towards the close the Mayor, as investigating magistrate, shows a mastery of detective technique of which Sherlock Holmes would have been proud.

First published in 1592, the play has been popular ever since - despite its anonymity. By the late 18th century, however, it was more commonly performed in George Lillo's degraded (‘dumbed down') version. However a spirited defence of the original text was put up by Edward Jacob, a Faversham GP, in 1770, and he was the first editor to suggest attribution to Shakespeare. Not till 1921 was the play performed once again in its original version, but since then it has retained its place in the repertory. It has been transformed both into a ballet (Sadler's Wells, 1799) and an opera (by Alexander Goehr, Hamburg, 1967).

Authorship remains elusive. Kyd, Marlowe, Peele, Greene and the 17th Earl of Oxford, as well as Shakespeare, are among the dramatists to which the play has been attributed. It does not altogether help that doubt has been cast on the identity of ‘Shakespeare' the playwright with Shakespeare the actor-manager. Certainly some of the earliest of the plays accepted as Shakespeare's were team-efforts rather than the work of one man. Perhaps Arden was another - though, if so, why was he not credited with authorship at the time? Perhaps it was an early 'prentice piece. Perhaps Marlowe at least had some hand in it - the text shows local knowledge, and Marlowe probably knew the town well since his youth was spent in Canterbury, 9 miles away, and his father came from Ospringe, only a mile from Faversham.

One thing is certain. This is among the most approachable of Elizabethan plays - couched in language which is direct as well as elegant; showing a mastery of swift scene-changing which a TV dramatist might envy; making the most of an exciting story; and resonating with present-day themes of infidelity, greed and violence. Perhaps not a masterpiece, but still a play with an eternal message.

The play's importance is that it marked a new departure on the English stage being the earliest domestic drama.

SYNOPSIS OF THE PLAY

For a synopsis of the play, see our Arden Play Synopsis page.