SIMON of FAVERSHAM: Chancellor of the University of Oxford

Simon of Faversham, chancellor of the University of Oxford from 1304 to 1306, was a philosopher and theologian who is believed to have been born in Faversham in the 1240s or the 1260s. Was ordained deacon in 1290 and granted the living of Preston, Faversham.

Benefactor and local historian who gave land for Faversham's open-air swimming pool (opened in 1964 and now part of the indoor and outdoor Faversham Pools) and the site of the Arden Theatre. A solicitor at 67 and 68 Preston Street, he wrote Stories of Faversham (1974), blending history and whimsy, and was made an Honorary Freeman of Faversham. Leslie Smith Drive is named after him. 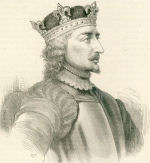 Stephen, the last Norman king of England (ruling from 1135 to 1154) and grandson of William the Conqueror, founded Faversham Abbey in 1147 with a view to its being a mausoleum and chapel royal for his House of Blois. The abbey existed for nearly four centuries, until its dissolution by King Henry VIII in 1538, but Stephen's royal house died with him. Stephen, who was born in about 1096, son of Stephen, Count of Blois, and Adela (daughter of the Conqueror), died in 1154 and was buried at Faversham Abbey. A carving of Stephen and his queen, Matilda, is in the town's Old Grammar School. No lifetime representation of Stephen survives. The portrait reproduced here is a stylised, 19th century one.

JOHN WARD: pirate of the Mediterranean

Faversham was the birthplace of John Ward, who flourished between 1603 and 1615 as the biggest pirate of his day. He settled in Tunis, converted to Islam and built a fleet that was a match for Venice's. Ward's life was dramatised in the Jacobean play A Christian Turn'd Turk. It is not known exactly when and where in Faversham he was born, but he was a fisherman before joining the Royal Navy. In 1603, he seized the ship in which he was serving and took to piracy. He made Tunis his base. His fleet, skippered by fellow English captains, was the scourge of the Mediterranean in the early 17th century, and of Venice and Spain in particular.

Partner in Whiting Brothers (later Whiting & Hine), an Ospringe Street building firm that shut in about 1970. With his brother John M. Whiting, he helped to save the Maison Dieu to be a museum in the 1920s. Excavated a Roman cemetery by the A2. Fellow, Society of Antiquaries. Keen photographer. Lived 1880/1 to 1931.

THOMAS WILLEMENT: an artist in glass

Thomas Willement (1786-1871) revived the art of stained glass in England, lost since the Reformation, and saved one of Faversham's finest buildings. Willement, born in St Marylebone on 18 July, 1786, was heraldic painter to King George IV and executed stained glass for more than 1,000 buildings. He bought, in 1845, The Priory and Church at Davington, then in a dire state, with the church having been used for lambing and for storage of smuggled goods, and set about restoration. Willement, the author of many books, died aged 85, on 10 March, 1871, and is buried in a vault at Davington Church.

Dr John Wilson (1595-1674), the first Master of the King's Music, was born in Faversham in a house on the corner of Abbey Street and Church Street. A building put up on the site in 1902 as a wine and spirits store bears a plaque commemorating him. Wilson is held by some authorities to have played the original part of Balthazar in Shakespeare's Much Ado about Nothing. He produced settings of several of the songs in Shakespeare's plays and was professor of music in the University of Oxford. Wilson's birthplace was near Arden's House, Abbey Street, which has its own Shakespearian link in the theory that Arden of Faversham was written by Shakespeare, who visited the town as an actor. 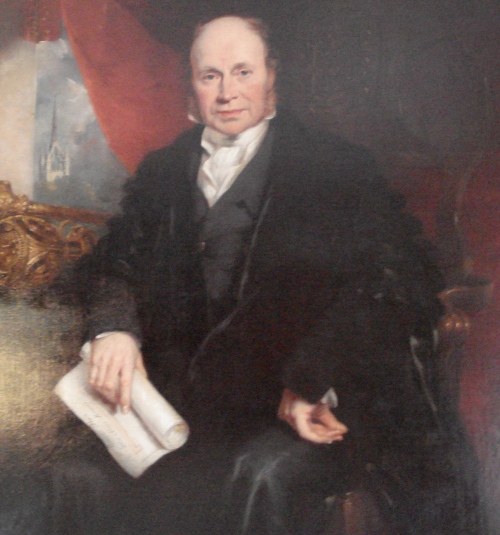 A bachelor lawyer who made Faversham his heir, Henry Wreight was one of Faversham's two greatest benefactors, the other being Henry Hatch. Wreight, who was mayor in 1809, 1818 and 1828, came of a family connected with the town for three centuries, and a namesake was mayor in 1638 and 1645. Wreight died at his home, 50 Preston Street (now called Wreight's House and counted as being in The Mall), in 1840, aged 80, leaving the town about £70,000. This financed provision of the Wreight School in Church Road (later merged with the Grammar School), the Recreation Ground, the District School in Church Road, and the Almshouses in South Road. A sum invested as Wreight's Charity still benefits the town. The Guildhall has a portrait of Wreight presented to him by the corporation, showing him holding plans for almshouses he endowed in his lifetime.