That two Roman saints and shoemakers, Crispin and Crispinian (or Crispianus), are said to have lived in Faversham late in the 3rd century is fairly well known, at least among people interested in the town's history.

The association is recalled by a plaque on the Swan , in Market Street, which marks the spot where they are said to have lived.

However, the town cannot be said to be exactly incandescent with interest in this remarkable tradition, which anywhere else might be the source of great pride and the inspiration for annual festivities on 25 October, St Crispin's Day.

There were three legends, not just one. 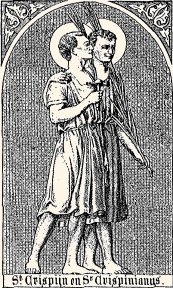 The first, first recorded, and elaborated, by Thomas Deloney in 1598, is the most coherent, colourful and interesting from a local point of view because it is set in Faversham, Canterbury and the unspecified location of a battle in France.

In the second, Faversham plays no part. The main setting is Soissons (Roman Noviodunum), a cathedral cityabout 20 miles west of Rheims in France.

The third is a variation of the second and includes a Faversham component. Originally it was probably a rather clumsy attempt to reconcile the second version with the first. It is this version which has come to be accepted in the town.

The first has been forgotten for more than 150 years, but it is, for Faversham, by far the most important. When local historian Arthur Percival read it, he realised that it was time to get into print again. This he has done with The Faversham Legends of Crispin & Crispianus, Princes and Saints, published by the Faversham Society.

Dr Percival said: “We could simply have published a transcript of the story as told in 1598 by Deloney, but the English, though quite racy, is not the English we use today, and might be a barrier to understanding and enjoyment. So what I have done is re-write it in contemporary English, retaining - at the risk of stylistic inconsistency - just a few of the more memorable passages and phrases from the original.

“The story is really quite fascinating and, if it embodies a folk tradition, as it probably does, may even shed a bit of light on the history of Roman Britain. It seems to be set in the time of Carausius, Britain's ‘breakaway' Roman emperor, who reigned from 286/7 to 293. In this version Crispin and Crispianus are the two young sons of a native British prince who has been executed by the emperor for stepping out of line. They are Christians, and, like the emperor himself, live in Canterbury.

“Their widowed mother realises that as they near manhood, their lives will be at risk not so much because of their faith as because they will be seen as a likely focus for discontent. She decides that for their own safety they need to disguise themselves and leave Canterbury. They set out on the Roman road to London (the present A2) and pause outside a shoemaker's workshop in Faversham.

“The staff sound so cheerful and the atmosphere seems so congenial that they decide to ask for seven-year apprenticeships. Offered these, they settle down well and soon become champion shoe-makers. To tell any more of the story now would spoil it, but it is great fun, exciting, and has the happiest of endings.

“Though I tell the story exactly as Deloney told it, I have embroidered it here and there where knowledge of history has improved since he recorded it. For example he knew that the Roman Empire was in poor shape at the time, with barbarian invaders penetrating Italy itself as far as Ravenna. What he did not know was that Britain was then actually the safest part of the Empire and that as a result some Roman land-owners had fled here from France. Equally he did not know that on the outskirts of Faversham was probably a major military depot.”

And how did Deloney hear of the legend? He seems to have had no roots in Faversham. Not much is known about him except that he was a silk-weaver, who was born in about 1543 and died in 1600. He did have good colloquial French, and may have been a member of one of the thousands of Huguenot refugee families which settled in England in the later 16th century.

His surname is almost certainly an Anglicisation of the French Delaune. The Delaunes soon became prominent in London and one of them, Gideon Delaune (1565-1659) formulated a patent medicine which made him a fortune. Some of this he used to buy himself a big country house - Sharsted Court at Doddington, near Faversham.

Dr Percival speculates that if Thomas Deloney and Gideon Delaune were related, Thomas may have picked up the Faversham legend of Crispin and Crispianus while staying at Sharsted.

The other two versions of the legend are also printed in this new book, the second (Soissons) version in a few paragraphs, and the third, hybrid, version, in the late Leslie Smith's masterly reconstruction from his delightful Stories of Faversham, privately published in 1974.

The first (Deloney) version provided inspiration for two Elizabethan plays, as Arthur notes. Dekker's The Shoemaker's Holiday, first produced in 1599 and performed before Queen Elizabeth I a year later, is still in the repertory. William Rowley's A Shoemaker A Gentleman, first performed in 1600, and considered the better play in its day, follows Deloney's story more closely than the Dekker drama. It is set wholly in Faversham, Canterbury and France. Probably it was performed in Faversham, since the town was on all the big acting companies' circuit in Elizabethan and Jacobean times. However, it has not been performed in the town for at least 250 years and may be ripe for revival.

The Faversham Legends of Crispin & Crispianus, Princes and Saints, No 73 in the Faversham Society's
series of Faversham Papers, is on sale at the Fleur de Lis Heritage Centre in Preston Street.